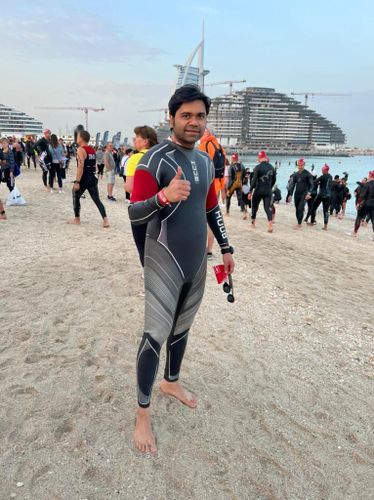 Gaurav Jajodia, the Director of Jai Balaji Group of Industries, is not just a successful businessman but also a fitness freak and now has a larger vision to fuel FitIndia movement. Gaurav's vision for a fitter and healthier society coupled with his interest in sports seeded the birth of JBG Endura101- A one stop for all fitness enthusiasts. Dubai Ironman finisher himself, Gaurav Jajodia strongly believes that if it doesn't challenge you, it will not change you. He aspires to be that change in society and motivate people around him to take up health and fitness seriously. He achieved the title IRONMAN 70.3 in Dubai on 9 March 2022 in which he completed swimming 1.9 kms, cycling 90kms and then ran a half marathon 21.195 kms back to back to achieve this title.

“At that point in time, running a 10K was also a big challenge for me!”

The businessman from Kolkata started his running journey in 2014 by signing up for the Tata Steel Kolkata, 10K. He reminisces about the sporting activities he was a part of back in his school days but gradually down the line, his focus shifted towards balancing his work and social life. He was accompanied by a bunch of other people who also had started to prepare for the run and soon formed a group that grew more substantial and bigger as time passed.

By 2015, this group organised its own run, the JBG Kolkata Trail run which has now become one of the most popular ones in Kolkata. He claims that running is a gradual and slow process where he did 10K, then 25K then a couple of full marathons when he met a few triathletes. Being completely unaware of such an event, he found it to be very tough and thought it was only for professionals. But eventually, on finding the format of the event less intimidating, he started to learn swimming and after a year, in 2018 he attempted the Delhi Triathlon. He stated that swimming has been one of the most challenging things he had to face throughout his sporting journey as he had started from scratch. He claims to be diffident as the challenge he was training for was in open waters, Ironman Dubai.

“Anyone who is standing at the start line of Ironman would feel proud and good to have trained so hard to be standing there.”

Gaurav aims to complete Ironman Goa, November 2022. Out of all the events and challenges he has accomplished, he finds Tata Mumbai Marathon to be the best in terms of both, organization/ management and the crowd alongside the Jai Balaji Kolkata trail run as it gives a different view of his city.

“24 hours, if you utilise it properly, I think you can do so much more than this!”

Gaurav being an athlete and an organiser claims to have a better understanding of all the requirements like adequate water stations, emergency facilities, etc. He wants organisers to not just be money minded but also provide elite provisions for the long run.

“People look forward to a good organization for they are putting in their sweat and money.”

Talking about the upcoming running events by JBG Group, Gaurav mentions JBG Kolkata Trail Run. The event has moved on from just being a sporting event to a catalyst of social change and a new lifestyle. Over the last 6 years, we have been happy to lend our support to this movement and the team of Sportiz with its dedication and professional approach has made it the most popular marathon in the city. This is the 7th Edition of this event. This time they have a newly introduced AIMS-certified 10K category. The event is on 27th November 2022.