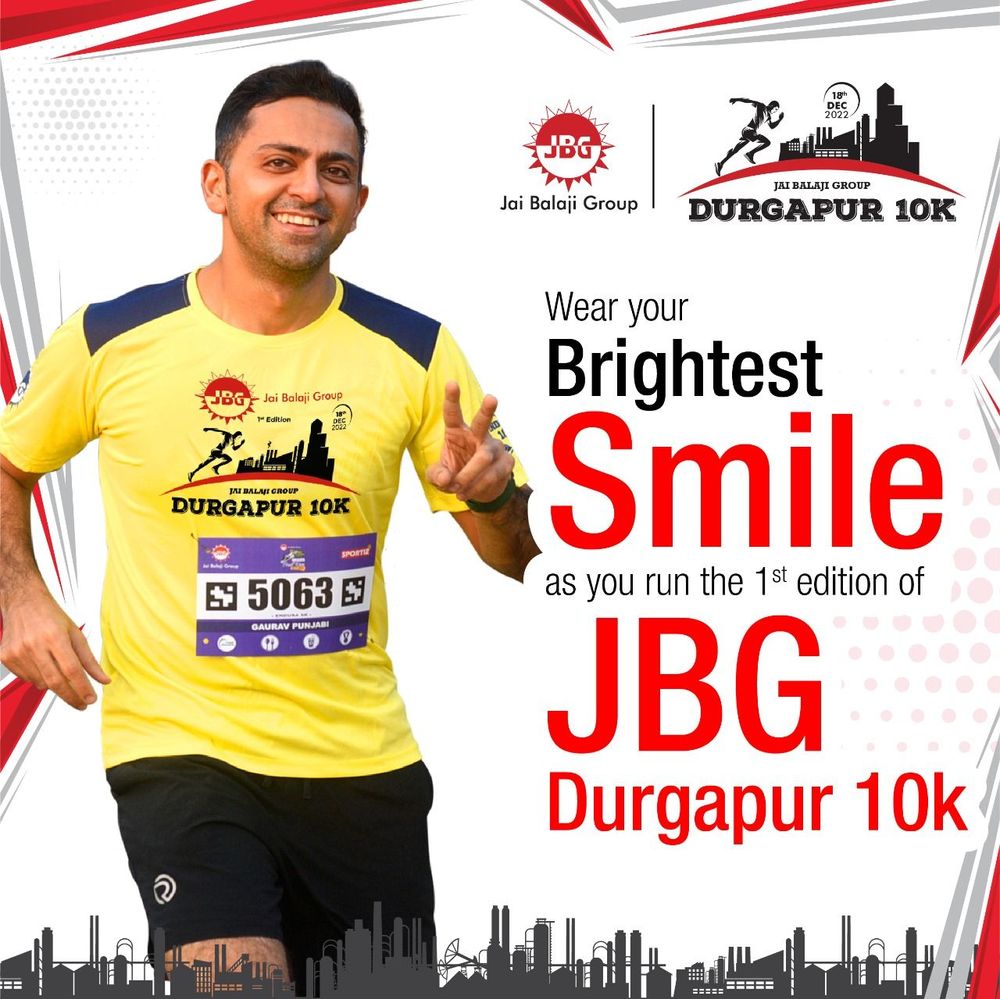 A remarkable 1st edition race event hosted by The Jai Balaji Group and Sportiz. Moreover, this event will reflect the form of the AIMS-qualified 10k race. The Durgapur 10k will enable runners to reflect better timings and efforts into running as a dream.

To the beautiful by-the-lake city of West Bengal- Durgapur, this race will be held, which is known as the Ruhr of India.

Did you know? Ruhr is a small tributary river of river Rhine of Germany. In West Bengal, coal is found in the Damodaran river valley of the Burden district. The iron and steel industry, cement, engineering industry, etc. have developed here based on coal. That is why Durgapur is called the ‘Ruhr of India’

The Durgapur 10k race will cover a distance of 10km. And, will be started from the Gandhi Maidan Ground. Moving forward will go through NIT Durgapur, DR BR Ambedkar Stadium, Caramel School, and a beautiful KMP lake on its way. Durgapur 10k event's 5KM run will be terminated by the lake. Whereas, the 10km race will be terminated by the eye-catching statue of Swami Vivekanand.

Durgapur10k race will be held in two different categories based on age and distance. The 5km race will begin a short time later after the 10 km race. The price distribution will be done separately for each age group. The 5k category of the race will start at 7:00 AM sharp. Whereas, the 10k category of the race will begin at 6:30 AM sharp. The prize will be distributed to the top three winners in each category. However, all the finishers would be awarded medals and time certificates to celebrate their will!

The prize distribution will be done separately for males and females in each category. The prize pool consists of more than 2 Lakhs, withing exciting medals waiting at the finish lines.

Mr. Gaurav Jajodia, the director of JB Group concludes, “For Jai Balaji Group, promoting and supporting sports is an integral part of our ethos. Our organization has been here for the last 20 years and we employ 20,000 workforces. This event is a symbol of pride and camaraderie and is our opportunity to contribute towards a better healthy future I urge the citizens of our city to take up the JBG Durgapur 10k on 18th December 2022 with your family and friends”

The Association of International Marathons and Distance Races, commonly known as AIMs, is an association that organizes long-distance road races. They consist of about 393 member races in about 120 countries all around the globe. It was set up in 1982 at a meeting in London. Their objectives comprise of

They work remotely throughout different parts of the world and have scheduled races before 2024 data available on their website.