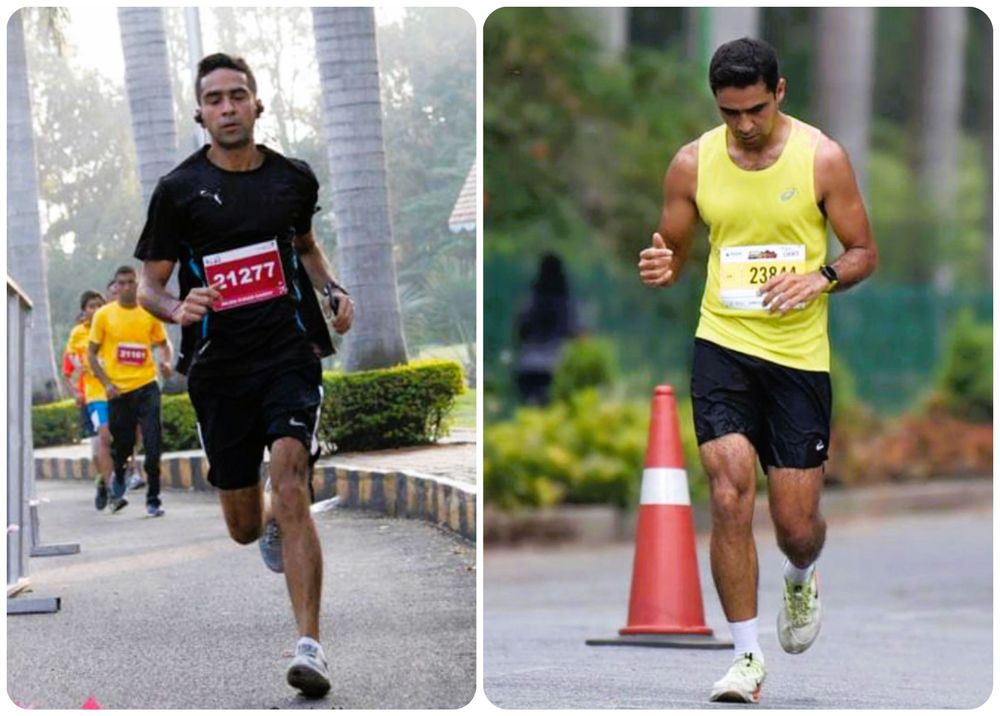 Kumar Gaurav was born in Patna, Bihar and for the past two years, he is in Bangalore. He was diagnosed with Type 1 Diabetes in 2010. At that time, he was required to take insulin twice a day depending on the glucose level. People around him said that now since he is diagnosed with diabetes and that too at such young age (25), he should take it easy with physical activities and not do strenuous training. But he wanted to do some physical activity to keep himself healthy and he started playing tennis , squash, etc. and decided to dedicate one hour a day on his physical fitness.

In 2014, he got married and in 2015, they were blessed with a baby girl. The situation was such that their daughter had to undergo an open-heart surgery at the age of four months and an eye surgery when she turned two. Doctors told them that she won’t be able to walk and will be bedridden for the at least five years, because she has weak muscles (Hypotonia). On her first birthday, 8 September 2016, Gaurav decided to run for those who can’t and with this aim, he registered for a half marathon happening in Bangalore which was only after two days i.e., on 10 September. There were 70 odd athletes there at that event, and his only aim was to finish the race. He started running with a group of people but then he realized that he can run much faster and he started on his own. After 19 km, he started getting cramps but managed to finish fourth overall.

“No hydration, no nutrition, and now my aim is to finish on  the podium.”

Post his first HM in 2016, he started enjoying long run sessions and he ran five half marathons in 2016-17 and finished in top 10 in four of them. In 2020, he got posted to Bangalore, for treatment of his daughter.

One day, while running in a group, after approx 800 mtrs, he suddenly sat down due to intolerable pain. Immediately he went to the rehabilitation centre and therapists there checked and said, “Your muscles have become like bone; they are so stiff.” They then made Gaurav aware of how muscles work and how important hydration is. After that, he started doing stretches, warmups, weight training and understood the importance of nutrition. At this  point, he started cycling and started doing short stretches like 20K, 30K, and later on, also completed 100K ride. Thereafter he changed his hybrid cycle to a road bike.

“Running is like the purest form of meditation for me. When I am running, I am not thinking about anything. My personal challenges, medical issues; everything is gone. I am just me at that time.”

Last year, he participated in a half-ironman distance duathlon at Dhanushkodi Rameswaram where he ran 5K, then cycling 90K and then 20K run again. He could complete all three events in a respectable time of 6 hrs and 18 mins. He has registered for Goa Ironman 70.3 which is scheduled in Nov 22. He also participated in Hennur Bamboo Ultra 30K category, which was a proper trail run and then recently in Bangalore Half Marathon wherein he finished 23rd out of 700 in his age category and 72 overall among approx 2000 odd athletes. His only target is to finish all the runs he attempts in respectable time. He also came 2nd in one of the duathlon at Bangalore (Dec 2021) wherein he cycled 25 Km followed by 5 KM run in 1 hr 2 min.

“Right fuelling is the key for any endurance event. Being diabetic, I have to keep my hydration in check. I cannot fuel myself  like other athletes can. But then I have to perform at their level.”

In India, there are more than 6 crore people living with Diabetes. And there is so much hype around diabetic people that they should do everything within limits. So many people start to live in fear and many people are taking advantage of this fear and making a business out of this.

“I take two insulin injections every day and that’s a lifelong process. And I have to LIVE with it.”

His message to people who are diabetic should not live in fear. The thing is they fear the word ‘injection’ which is just a simple medication. Glucose level should remain 110 to 150; but the moment it goes to 170, people panic. And when people panic, Gaurav tells them, “There was a time when my sugar level used to range between 400 and 500 and I wasn’t even aware and I was living a normal life. Now, if it goes to 170, it doesn’t matter. Mild fluctuations are okay.”

Sharing an incident, he said when he went for solo ride carrying two water bottles and forgot to carry chocolate bar, 80 kms into the ride and far from home, he experienced hypoglycaemia (low sugar levels), he just dragged his bike to a small shop on the highway and ate some cookies. Lesson learnt from that ride avoid solo rides on highways, carry some juice or chocolates and most importantly keep a track of your sugar levels during long endurance rides.

When hypo happens, the person’s levels go to as low as 30-40, and they just start behaving differently - their hands, eyes, brain stop working in a coordinated manner. At times when he runs, his level goes around 300 but when he stops, it drops to 100 or even low in no time. He feels a little fatigued and that’s the time when he has to train his brain and overcome his own fear. If you have a being event coming up, you are taking the same diet and same medication but your sugar level fluctuates beyond dangerous levels. The biggest trigger is stress.

Kumar Gaurav shares from his experience that do not fear diabetes. Overcome that fear and live to your full. Spend one hour a day on any physical activity (depending upon your age and capability) while taking care of your diet, nutrition, hydration and medication. He aims to spread awareness, empower and inspire people living with Type-1 diabetes and make them believe in themselves that how strong they are.