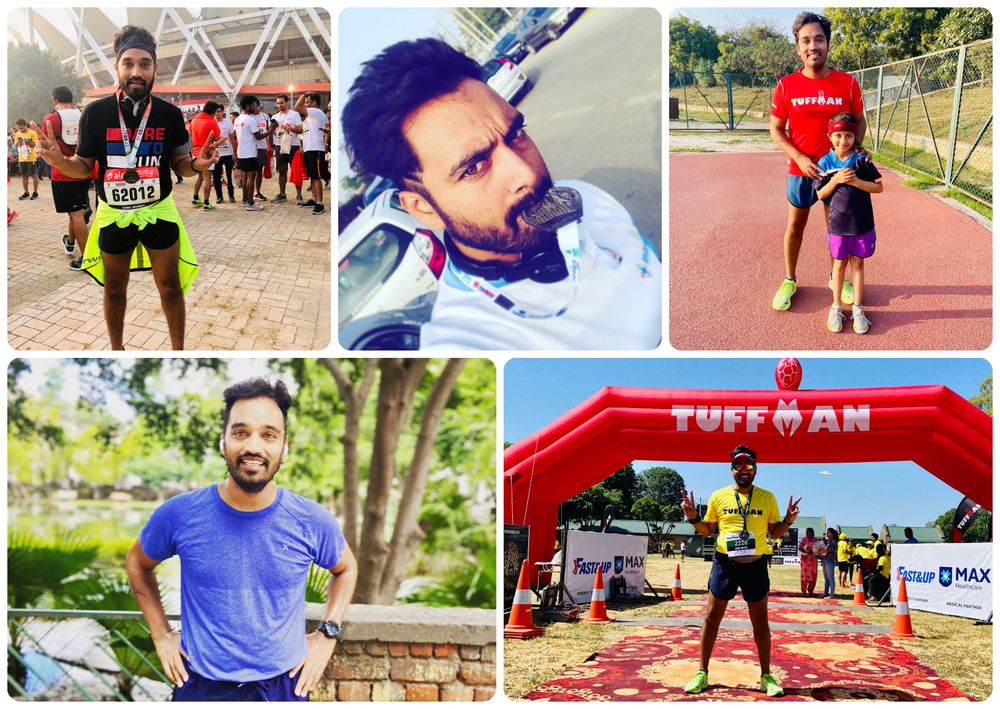 Sunil Munshi, 36 years old, a keen runner, works as a Creative Head at HealthKart. In his college days, he was into sports like Badminton which he had played at state and national level. When he started working, he started to put on weight, and eventually reached 117 kg. People used to make sarcastic remarks about it which actually  motivated Sunil to work on it. He realised that it's high time he should do something about it.

Cycling and walking were his first activities. Because of his body weight, running became a tough challenge for him; he could only walk 500 metres. His walking distance steadily increased from 500 metres to 3 kilometers, 4 kilometers, then 10 kilometers and so on. His running journey started in 2017. His first run was the one organised by Universal Runners, the Gurgaon Running Event and there he covered a distance of 5 kilometers. Sunil now also participates in various ultramarathons happening in Manali, Shimla, Ladakh, etc and is preparing himself for Ironman. His running journey has contributed very significantly to his weight loss goal as his weight has been reduced to 71 kgs now.

"I feel motivated watching people getting inspired by me."

As he got into the sport of running, he got introduced to some running communities too like Gurgaon Road Runners and the Sweat Lovers, Run Above All, which helped him connect with different people. The motivating fuel that keeps Sunil going is the appreciation that he receives from the people who once used to make fun of him; those people have become very supportive and Sunil can feel that people are changing their lifestyle after getting inspired by his journey. Now he runs for the people around him. It's not just the comments of people that push him to work hard, it's also because he wants to be free of diseases.

"Earlier I used to run in my society only but now I can see many people running in the morning and they ask me about the sport."

He credits his love of sports to his father, who was also a sports fanatic and Sunil's 7-year-old daughter too is actively involved in athletics and swimming. The next goal on his list is Ironman. He is prepared for the cycling part and currently training with the swimmer so as to be able to cover 5-6 kilometers. For running, he is training under his daughter's coach who guides him on endurance and stamina.

"People used to pass comments on my weight but I took all of them positively and worked on myself."

Working as a Creative Head in Healthkart, he shares that Healthkart is a company about health and fitness. This is the reason why all the people in his workspace generally talk about health and Sunil was the odd one out when he joined as everyone was very health conscious. He too started to change himself and found the people around him to be very supportive. Handling office work is also manageable for him as the work schedule is flexible. Sunil believes that family support is very essential and his wife motivates him a lot, health is a clear priority for her. This is why they encourage their daughter to participate in sports too; she covers the distance of 3-4 kilometers very easily.

Sunil has participated in 3-4 ultra marathons till now. It is suggested that one should undertake one ultra marathon once in a month because they demand a lot of energy and lead to muscle loss. His ultrarunning experience in the mountainous region has been very tough as it becomes hard for the body to keep going but Sunil pushed himself to finish the run. The 50K he ran in Goa was easier because of the plain region.

"All that I am doing right now is for my society."

"Run for your own happiness."

He says that the recovery period holds very high importance. Long runs cause muscle loss and for their recovery, not only the diet but proper rest and stretching are required too. After regular running days too, stretching and mobility exercises must be carried out and focused on.

He wants to convey the message that it's never too late and a person can start working on himself/herself from any point of time. Even a little walk is very effective to begin with. People do body shame others but we must not pay all our attention to those things. We must work for our own health and happiness.

"A country actually develops when its citizens are healthy."