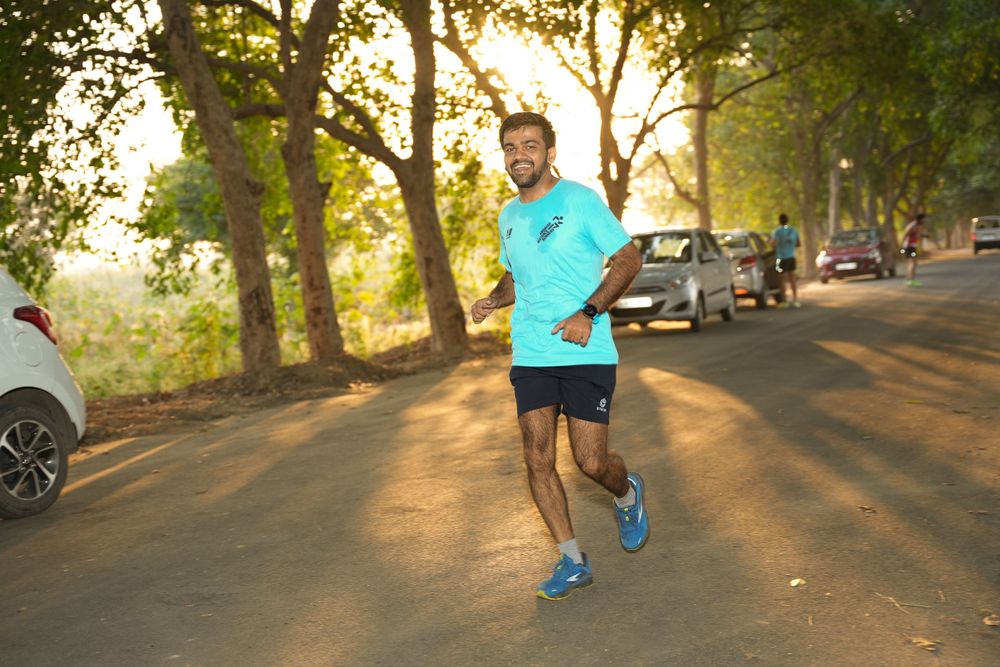 Naman Shah, running his own family business in Ahmedabad, started his journey as a runner during COVID. He was intimidated by the thought of obesity due to the lockdown resulting in a sedentary lifestyle. He kicked this thought off by hitting the streets and running 2, 3, 5, and 10K. After experiencing the runner's high, he joined Ahmedabad’s biggest running group, Ahmedabad Distance Runners.

“Whether you’re comfortable or not, it’s a part and parcel of life.”

The practice he started as a fitness regime, now became his daily routine. His newly grown interest in this activity helped him make it a habit and overcame all the obstacles thrown in his way. He is a solo runner and occasionally has to deal with boredom. Ahmedabad being a city with extreme weather conditions made it challenging for him to stay motivated. May it be the scorching heat of summers or the cold winds of winters, nothing could shake his determined mind. He starts at 5-5:30 AM and runs till 7 AM. He ran his first marathon on 27 Feb 2022, virtually. He was tired, exhausted, and felt pukish as well but did not give up and finished the marathon.

“In my mind, I kept saying that I have to finish it off no matter what.”

Naman sustained a minor injury on the right side of his leg during training. He did physiotherapy, icing, and foam rolling, and recovered soon. The doctors suggested not increasing his mileage overnight as it puts stress on the legs and other body parts. He then slowed his pace and trained cautiously.

“It’s a matter of interest and your mental strength that can keep you going.”

Since he is a self-trained runner, he has a lot of discussions with other experienced runners and gains a lot of insight on the dos and donts of running. Even though Naman has very little personal experience and exposure to this activity, he hoards a lot of enthusiasm, optimism, and a bag of other’s experiences.

“You need to challenge your body because if you do the same (activity) continuously, it will get accustomed to it.”

Naman is the kind of a person who usually gets bored easily doing the same thing repeatedly. To avoid this boredom, he recommends people to have other activities, like yoga, swimming, cycling, zumba, as a part of their routine as well. Last but not least he suggests runners to have patience, and comparing themselves with others will only demotivate and bring no good. Right now, being an off-season for runners, he is targeting to finish an ultra this winter or next year depending on how much endurance he is able to build up.