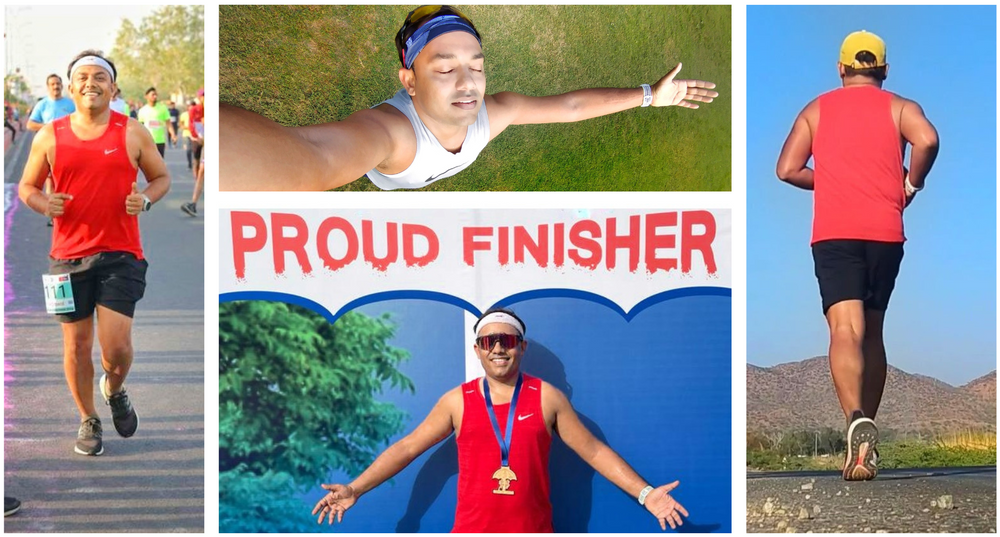 NIMIT AGARWAL is a confidential printing businessman who quests human-nature relationships through his idea of devoting himself to running. Apart from being a runner, Nimit has been a triathlete for more than 30 years! With utter belief in the conception of a growing physical and mental state, Nimit has never looked back.

Nimit initiated his journey as a runner in his days of academics, when the internet did not seem to exist. Being always close to nature and a fitness enthusiast, he looked at running as a way to improvise his mental and physical self. Since then, he has participated and run in a tremendous amount of events and has made himself an inspiration for many!

Nimit shares that running is the foremost sport that one can pursue with minimal pieces of training and requirements. The accessibility, convenience, and effects on the human body both physical and mental are what make running a ‘must sport’ out of all.

Nimit shares that through utmost prioritizing physical health, he has gained countless rewards. From a good circle of like-minded enthusiasts to the connectivity of nature. His reward is the capability of Optimistic decision-making, which has led Nimit to a peaceful and healthy state of mind, his approach toward life, and the energy to overcome challenges and execute proper plans.

Nimit believes that humans to obtain true peace of mind shall remain connected to nature. Therefore he chose running as a means to connect and explore nature around him.

I will not say running has changed me, it has indeed made me

Nimit recalls her first race to be the 6k Dream run under the Jaipur Marathon long before 14 years ago. Being an amateur runner, he took no precautions and minimal training and was able to complete it with a comrade. By far, he has accomplished many such events and half marathons, and his 6 major Olympic triathlon races in Jaipur, Udaipur, Odisha, Haryana, Gurgaon, and Greater Noida which he considers his biggest accomplishment to date.

Nimit believes that with proper training methods and sufficient requirements, any injury during races can be prevented, and therefore the journey of overall fitness can be cherished. He suggests newcomers to…

Nimit also talks about the misuse of running as a sport and condemns acts of misleading guidance and wrong attempts made by runners to showcase others’ achievements in their name.