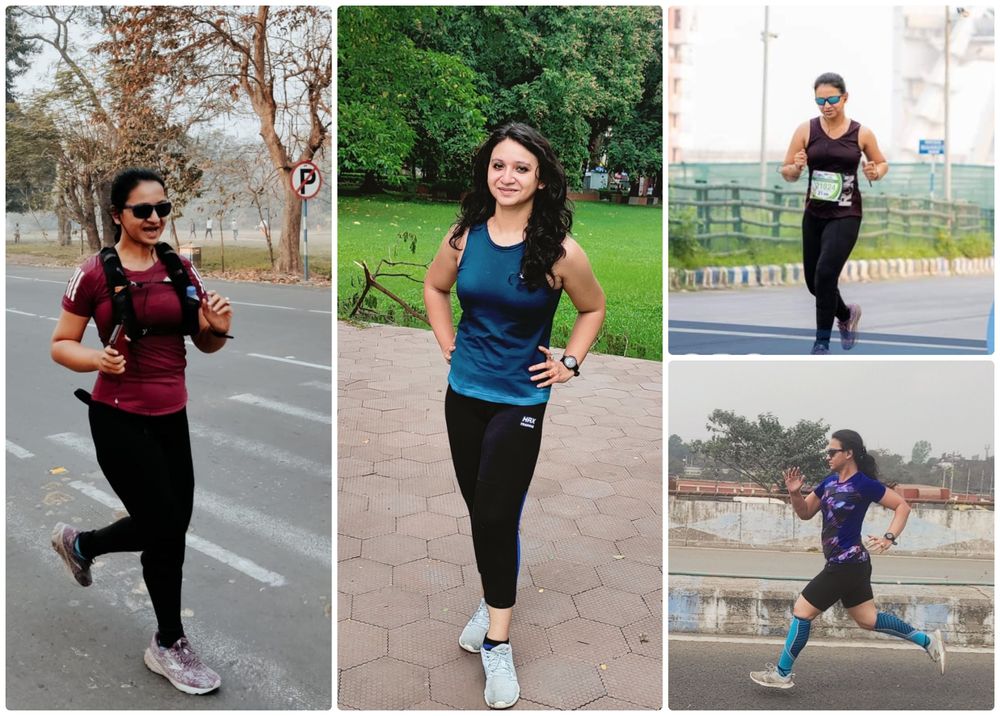 After getting caught up in years of raising a baby, household chores and managing a professional job as an IT engineer, Roshni had finally started to come around to the decision to take care of her body. She was overweight, and led a sedentary lifestyle with unhealthy eating habits and no regular physical activities. She began her endeavour of fitness with activities like Zumba and yoga. Eventually, she came across a running group in her locality and started running a little bit. Roshni mentions she used to face problems in running even short distances and used to get exhausted quite quickly. She almost thought that it wasn’t her cup of tea, and because of this, she was confronted with the discouraging impression that maybe it was too late for her to start something like running now.

Further, running in the initial stage for Roshni was more of a peripheral activity in her workout regime and remained an irregular thing. She pointed out that her irregularity with running also caused her unforeseen aches and cramps in her legs. Roshni believes it could be because of her lack of knowledge about running at that point.

Her journey of running turned in a better direction when she found out about an online campaign “100 Days of Running” challenge (HDOR). HDOR is a fitness movement started to encourage people to make running a part of their lives, a habit, and a way towards better fitness by committing to it consecutively for 100 days. Through this campaign she got introduced to a program where people like her got a chance to attend sessions hosted by certified coaches who helped them with the training that is required to cover a 21-km run by laying out workout charts regarding proper strength training, mileage per week, distribution of different types of runs in a week e.g. intervals, speed running, long slow distance run and flyover runs, etc. She believes following that plan alone brought exponential improvement in her structure, running form and posture, and with her consistency towards the sport.  Another progress that Roshni witnessed was that she was less tired after her runs, her ability to run continuously for a longer duration and her speed improved as well.

“I noticed I was no longer scared of running long distances after the HDOR program.”

She added that before the HDOR program, she nearly had a phobia of running long distances. Being a slow pace runner in the beginning, she had to more or less run alone. During such time, keeping herself focused on the run and not getting distracted was also a challenge she had to overcome. She is truly certain that her regular practice along with training has not only made her physically but mentally strong as well. She considers her sense of dedication towards running more solid now and doesn’t feel like giving up while running anymore.

“Running didn’t only bring the transformation of the body but the mind as well.”

Currently, Roshni claims that her mind and body both have become used to running distances around 20 km and crave for more, she hopes to run even longer distances of about 42 km in near future.

When asked about the role played by her family in her journey, she cited that her parents and in-laws were initially hesitant about her indulgence in running. It was hard for them to relate to sports at such a later stage in life when she was already married and had a child to take care of since they had never been part of any sports activity. But, as they started to notice Roshni’s physical and overall improvements they encouraged her to participate in running events if she liked. Nowadays, even her little daughter has been showing her interest in running.

“When you run without music, that is when you actually have a conversation with yourself because you have to constantly motivate yourself to finish your run. Thinking negatively then will only make you want to stop.”

Advising people who cannot seem to make it in running, Roshni says that it is mostly women who tend to keep their personal fitness in the back seat. She further laid down the following bits: