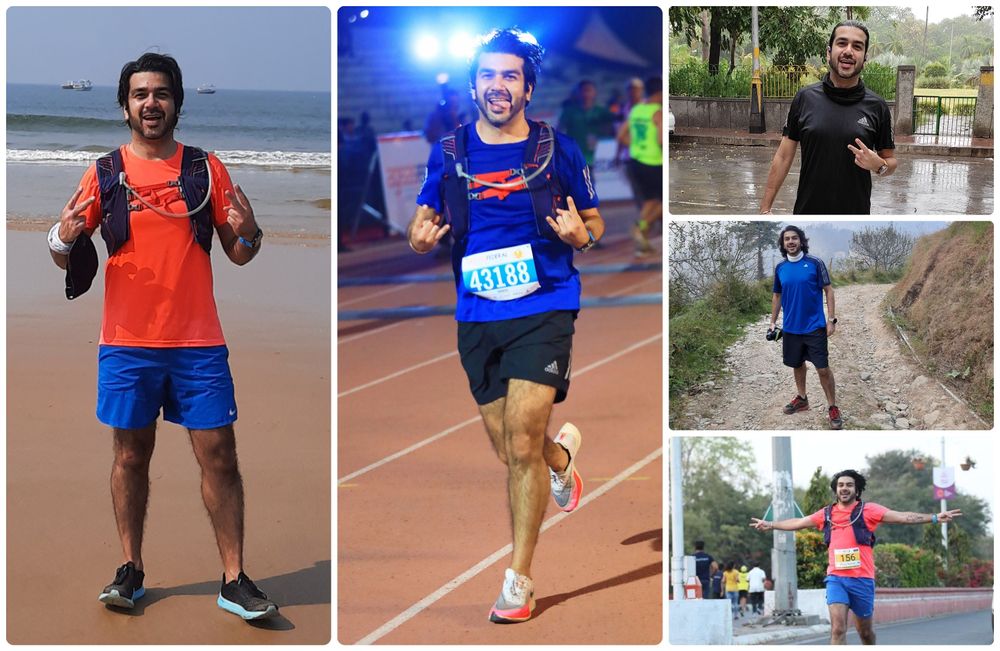 Dhruv Varma, 36 years old from Delhi, associated himself with running and fitness first when he stumbled upon a cardio competition in his gym, back in 2011. Participants in the competition were supposed to burn the maximum number of calories in a fixed amount of time. During the competition, Dhruv realised that increasing the pace in short bursts didn’t necessarily burn more calories overall, so he adapted to running at a steady pace and quickly developed the ability to run continuously for about 20 to 30 minutes.

Having asthma since childhood, Dhruv didn’t expect himself to run for too long. He mentions, it was baffling for him to witness himself cover 6-8K distances. Eventually, he came across the Airtel Delhi Half Marathon and started to train for it by himself. He soon got a GPS enabled phone and started to track his distance properly with a few apps such Adidas MiCoach. With that, he successfully completed his first marathon in 2011. He also noticed that his asthma felt a lot more in control ever since he started running.

“You learn to tell the negative voice in your head to shut up every time it tells you that something is not possible.”

As precautionary means, Dhruv used to carry an inhaler in his armband and did so during his first few half marathons as well. He claims that he doesn’t require it as much anymore and doesn’t even carry it while running, anymore. He emphasised on the importance of environmental conditions such as weather and air quality in a city for a runner’s life; he prefers to keep a check on Air Quality Index (AQI) and refrains from running when it is above 300. He also uses a neck gaiter when the AQI is above 200. Dhruv has also made it a point to avoid running when the temperature exceeds 40 degrees. He cites that he prefers running in the afternoons during winter time, since the air quality is usually better during the afternoon, in the summer months, he tends to run later in the evening when the temperature starts to dip.

“I keep reminding myself that I’m a recreational runner. I run for fun. Any goals that I set, are just goals that I, myself, set. So, I try to make sure that I don’t take them so seriously that I lose the joy of running. Sure, I adjust things in my personal and work life for running but that’s not because I have to check some race off my list but because I enjoy running, including the everyday training runs, and the casual goal-less runs, as well.”

After his first half marathon in 2011, Dhruv didn’t see any stopping to his marathoning ambitions, he set his goals on a sub 2 hour half marathon and then ran it just three weeks after his first. Subsequently, he started training for a full marathon but unfortunately injured his ankle in an accident. In 2020, he decided to get back to running again and restarted his running routine just prior to the lockdown. Dhruv lost about 20 kgs in 4 months and in September 2020, in the absence of any on the ground events, he ran the full marathon distance by himself.

“Having a goal keeps you motivated and inspired to push a little harder, to do something more than you would’ve otherwise. It helps you grow.”

With every milestone, Dhruv felt more and more driven to set higher goals for himself. He reveals he did so because he enjoyed not only the challenge of the goal but also the process of getting there. He believes becoming fitter is a peripheral benefit of running, and is just happy to indulge in it for the fun of it. He says running also helps him destress from work and helps improve his focus and productivity.

Dhruv trains himself because he feels that having a coach might take away his freedom to choose and change things as per his requirements.

“The global nature of my work prevents me from running early mornings, when most running groups run. Having a running coach could help but I fear that that might take away the fun of it. So, I adapt standard training plans to my work and social life.”

Recently, Dhruv ran two back to back full marathons, just two weeks apart. And he’s  now training to repeat that performance on the global stage; he’s looking to run two  world marathon majors - Berlin Marathon on 25th September and Chicago Marathon on 9th October, merely two weeks apart! Dhruv finds his training plans online through sites like Runner’s World and Garmin Garnet. If necessary, he adjusts them according to his work schedule.

“It’s addictive, you surprise yourself. It’s a reminder of how much more capable you are than you give yourself credit for.”

The Jaipur Marathon on 27th February was Dhruv’s first sub 4 hour marathon, and within two weeks of it, he managed to run his second sub 4 at the AFLI New Delhi Marathon. He credits his success at the second marathon to the running community; he mentioned having the company of his fellow runner Dr. S.P. Bhatia, who inspired him to run quicker and helped him get through the the first 30K of the race, he also talks about the impact of the AR (Adidas Runners) cheering squad, made up of his fellow runners, Rohit Pathak, Nivedita Samanta, Rajnish Vedi, and Jitindeep Singh.

“The running community is awesome! Where else do you find people, who aren’t participating, waking up at ungodly hours of the morning, just to go cheer on their peers!?”

“Now I can go to a city and ask people in the running community about where to go and run.”

In gratification, Dhruv mentions that the popularity of running and marathoning has increased a lot and spread beyond just the big metros. Seeing runners on highways in every city, like Ambala, Karnal, Chandigarh, Panchkula and Mussoorie, warms his heart. Although, he adds that some broader awareness is still lacking.

“Back in the days, people would consider me crazy for running so much but awareness has now gone up because the number of runners has gone up.”

Summing up, Dhruv mentions he’s grateful to his family for the support he received in every running endeavour he took upon. His mother and wife make sure to wake up the morning of his marathon events as he tends to get anxious before big races. They even join him in his events to cheer him on even if the events are in different states. He says they don’t share or  understand his passion for running but they quite generously support him anyway and that is all that matters.

Bhaago India was extremely delighted to meet a runner with such sensibility when it comes to training and adaptation to training plans. We wish him good luck for all his future runs!