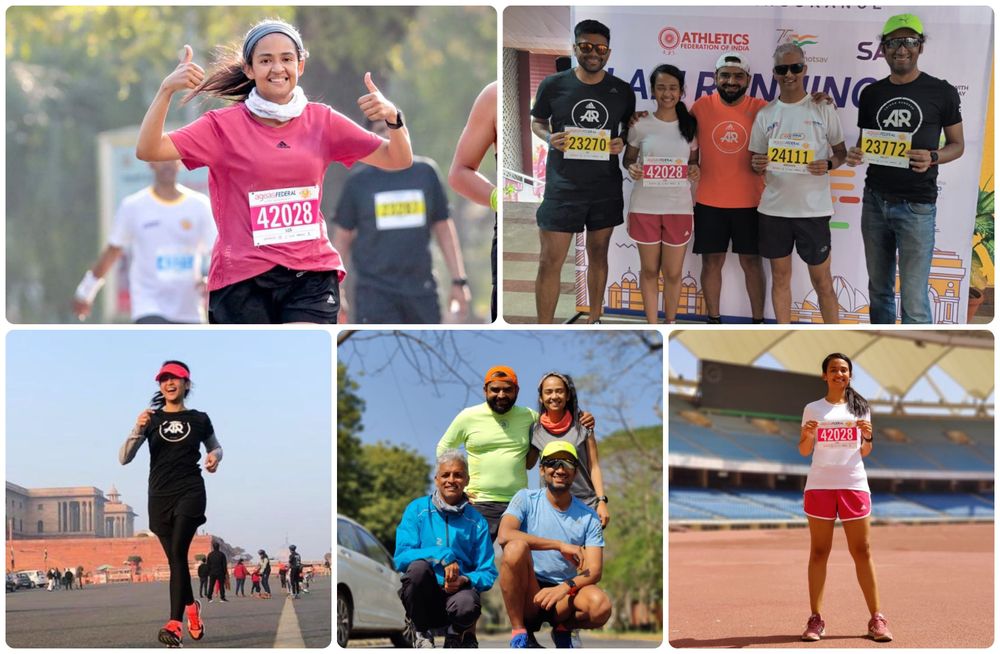 Liza Maria Powell was born and brought up in Jharkhand, and has been living in Delhi for 12-13 years and is working at British High Commission as Senior Investment Adviser currently. She got acquainted with running as a kid through her father since he was an athlete as well. Even though she didn’t have a lot of motivation back in those days, she leisurely continued running till her college.

In 2018, Liza heard about the HDOR (100 Days of Running Challenge) and took part in it. She claims that decision changed her life, she came across the incredible running community and joined Adidas Runners. During that period, she realised that most runners are not very fixated on competition and indulge in it for the thrill. She believes it’s the mere joy or the post-running high runners get is what makes runners want to run more and more.

Without an agenda in her mind, Liza joined the Adidas Women’s Brigade, wherein they prepare women for the ADHM (Airtel Delhi Half Marathon). She added that it was a very motivating experience as the coaches and the people around her deeply encouraged her about her ability to do a 21K run.

“It’s not just being in the marathon physically or just feeling the struggle physically... it’s fairly a mental game and you have to convince your mind to complete a certain distance… your mind takes you through the rest of the kilometres or the painful kilometres.”

With this ideology, Liza successfully did her first 21K run in 2019. She continued to participate in several unofficial half marathons after this. She even participated in and fruitfully completed the NDM (New Delhi Marathon) this year. To prepare for it, Liza did a lot of yoga, strength training and followed a plan under the guidance of her fellow runners, some of whom had done a full marathon before. She even got extra support from her friend Abhinav Jain who not only helped her with the plan but also ended up pacing her for the full marathon.

Witnessing herself finally being able to run for distances such as 35K and 42K, Liza mentions she gets overwhelmed with tears. To finally realise the true potential of her mind and body was something extremely enthralling for her.

“We humans are amazing. We can do anything if we put our mind to it.”

Talking about her family support, Liza is grateful for the time, space and empowerment she has received from her husband. There are a lot of sacrifices she had to make in order to get to the level of fitness she is at now, missing parties, losing touch from friends due to training, not indulging in late nighters anymore, giving up a lot of food items, etc. She is aware that her strictly disciplined lifestyle must have put her family and friends in discomfort at some point. But luckily everybody has been sweet and encouraged her to continue pursuing running.

In order to balance her work life with running, Liza would even take her work calls during running or go on short runs during lunch. She considers being regular with her training extremely important as it prepares her to visualise the finish line and prepare more mentally than physically.

“Running has been like therapy to me… Whatever doubts or questions that I have in my life, I feel like they all get answered while I am running.”

Liza starts out her tips for beginners by saying -

Reflecting on the growth of Indian running groups and community as a whole, Liza feels very good about the prospects of marathoning in the country. Because the more the runners around us, the more inspiring stories to get motivated by. She admires the camaraderie, cheer system and the sense of togetherness runners have in the community.

She also lays emphasis on the importance of safety for women who run so that more and more women can come aboard without the concerns about timings, choosing to wear desired sportswear and running alone.

Liza plans to do The Berlin Marathon in September this year and Bhaago India wishes her all the best for it and all her future runs.